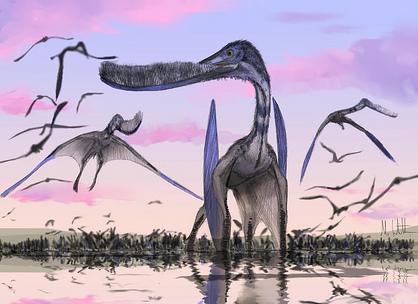 Pterodaustro (meaning "southern wing") was a Cretaceous pterosaur from South America. Pterodaustro had a wingspan of 133 centimeters (52 in), and possessed about 1,000 tall, narrow bristle like teeth, which presumably were used in filter-feeding, much like modern flamingos.

It had many bristle-like structures on its jaw that might have been used to strain crustaceans, plankton, algae, and other small creatures from the water. Once it caught its food, Pterodaustro probably mashed it with its small globular teeth from its upper jaw.

This pterosaur's diet may have resulted in a pink hue. Thus, it is often dubbed the "flamingo pterosaur".

It was discovered in 1970 by Jose Bonaparte in the Lagarcito Formation, situated in the San Luis Province of Patagonia, Argentina. It has also been found in Chile.